Showing posts from July, 2010
Show All

Off to the Regency Races!

Here is a picture of Manchester racecourse during the nineteenth century. Today I'm blogging over at the Word Wenches about the Georgian and Regency experience of the races and race-going. As this is a blog about gambling there is an ARC of my new book Whisper of Scandal to be won! Please come and join me!
Post a Comment
Read more

The case of the rival 17th century swimming pools! 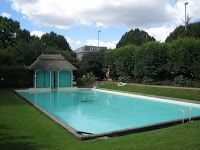 Yes, I'm blogging about swimming again, which for someone who is afraid of water seems a bit odd. It must be all the hot and sunny weather we're having. But something caught my eye when I was reading the newspaper over the weekend and sent me off researching the gardens of Oxford and Cambridge colleges, a mysterious and secret world that is fascinating to explore. And so to Emmanuel College Cambridge which claims that it has (probably!) the oldest swimming bath in the country that is still in use. This glorious little pool was in use as early as 1690 or possibly even earlier. A changing hut in the classical style was built about 1745 and the present thatched hut dates from the mid-19th century. By 1745 a 'plunge' was regarded as good for headache, and 'against the vapours and impotence'. In living memory the water in the pool was dark green with algae, so dark that a Fellow who liked to swim the whole length along the bottom complained that he lost his way. A
4 comments
Read more

Academic Crush of the Week - Doctor Who 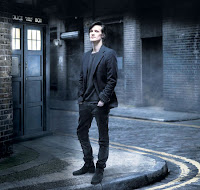 Well, it's a sort of academic crush of the week plus the opportunity to post some lovely pictures. I missed this debate when it happened a month ago and have only just caught up with it but apparently at the Annual TV Lecture at the British Academy of Film and Television Arts, Stephen Fry, broadcaster, presenter, comedian and much more, criticised the BBC programmes Merlin and Doctor Who as being "like a chicken nugget. Every now and again we all like it … But if you are an adult you want something surprising, savoury, sharp, unusual, cosmopolitan, alien, challenging, complex, ambiguous, possibly even slightly disturbing and wrong... You want to try those things, because that's what being adult means.... The only drama the BBC will boast about are Merlin and Doctor Who, which are fine, but they're children's programmes. They're not for adults. And they're very good children's programmes, don't get me wrong, they're wonderfully written … but
4 comments
Read more 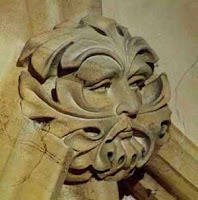 I was tidying up my study and came across this article on gargoyles and it was so interesting I thought I would share it. Aren't they pretty! The gargoyle originated as plumbing. They can be traced back to Ancient Greece, Egypt and Rome when decorated terracotta waterspouts depicting lions, eagles and other creatures were common. Today they are still visible on the Parthenon in Athens and at the ruins of Pompeii. The word "gargoyle" comes from the French gargouille (throat) from which the verb to gargle also derives. The gargoyle was, however, a rather splashy way to dispose of rainwater and in 1241 King Henry III invented the drainpipe, instructing the Keeper of Works at the Tower of London "to cause all leaden gutters... to be carried down to the ground." Lead drainpipes began appearing in quantity in the Tudor period. At the top of these pipes where the gargoyle had originally sat, there was often an open-topped box known as a rainwater head. In the grea
14 comments
Read more 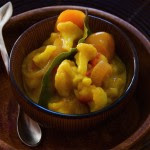 I almost didn't post up the recipe becaue I don't like pickles and chutneys. Then I thought this is like licorice - just because I don't like piccalilli doesn't mean that there aren't hundreds of people who do. So here is the recipe for those who do. The origins of this familiar mustard-coloured pickle and its name are open to conjecture. Recipes date from the 18th century and because of the inclusion of spices they may have developed with Britain's expansion into India and the East. The most likely explanation is that the name is a pun on the words pickle and chilli. 1lb peeled button onions 1lb 8oz cauliflour florets 1lb 3oz chopped cucumber or courgette 1lb chopped green beans 3 red chillis cut into strips Half a teaspoon cayenne pepper 2 tablespoons mild curry powder 2 tablespoons mustard powder 2 teaspoons turmeric 2 teaspoons allspice 2 tablespoons ground ginger 8oz sugar 2 tablespoons black peppercorns 3 oz plain flour 2 and a half pints of malt vineg
4 comments
Read more

Thank you to everyone who helped me reach the 50 blog followers milestone this week! Today I am blogging with the lovely Deanna Jewel at http://deannajewel.blogspot.com/ Please drop by to say hello and join us for tea and cakes in the virtual parlour of Ashdown House. There is a set of the Brides of Fortune trilogy books up for grabs too!
1 comment
Read more

The RNA Conference - Seminars and Shoes, Ceilings and Ghosts! 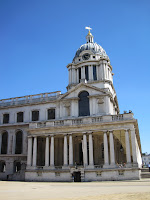 “Romantic fiction, at its best, has a lot of truth to say about the human heart. It gives readers the chance to dream and aspire.” So said Joanna Trollope, keynote speaker at this year’s RNA Conference summing up two of the most enduring and appealing aspects of the genre. Yes, I’ve just returned from the Romantic Novelists Association annual conference, this year held at the Old Royal Naval College in Greenwich, London. As if the conference itself is not inspiring enough for a writer, to be in the surroundings of this extraordinary historical site was enough to take my breath away. Permanently. For the entire three days. In Tudor times Greenwich Palace, reputedly Henry VIII’s favourite palace and the birthplace of Elizabeth I, lay on the site. Then in 1694 The Old Royal Naval College was established by charter with the aim of providing relief and support to seamen and their dependents. The site was planned by Sir Christopher Wren and during the first half of the eighteenth century
6 comments
Read more

I'm mentioning my July website contest here on the blog because it is a very special one. I'm celebrating the fact that next month I will have be launching a beautiful new website - so this is the very last contest on the current site. The prize is an ARC of my new Regency historical Whisper of Scandal which is out in October. There's also a silver charm bracelet up for grabs. So if you would like an advance copy of Whisper of Scandal just click here to enter!
Post a Comment
Read more

A couple of weeks ago I played truant from the writing and went on a trip to Somerset. Somerset is one of my favourite places. I lived there for seven years in my haunted cottage and it's a place I love re-visiting whenever I can. It's a county that feels particularly steeped in history and folkore. On this occasion I was combining some natural history with some English Civil War history. We were on a trip to find the Large Blue Butterfly at Collard Hill, a few miles from Glastonbury. The Large Blue died out in the UK in 1979 but has been brought back from UK extinction as a result of the re-introduction of butterflies from Sweden combined with some very hard work on the part of the National Trust to make sure it has exactly the right habitat and conditions to flourish. At Collard Hill visitors are allowed to wander freely trying to spot this rarest of butterflies. We had a hot day for our visit and our sense of anticpation rose as we toiled up the hill in the sunshine. I w
4 comments
Read more
More posts

Nicola Cornick
I am a historian by training and a writer by profession. My books reflect my enduring fascination with history, folklore and myth. Join me and step into the story!